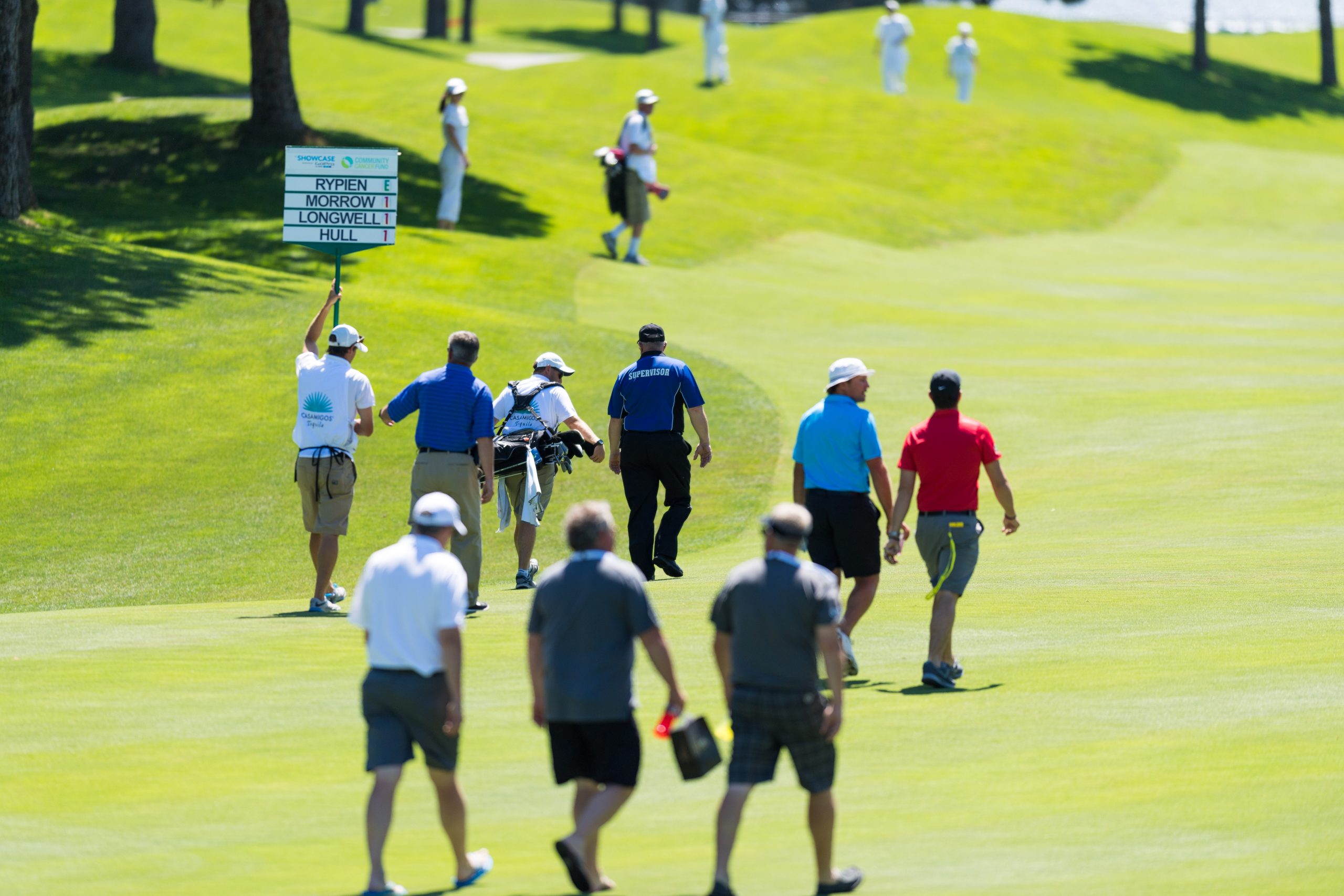 There were no professional golfers at The Showcase but 15 former pro athletes had moments where they looked the part.

Former NHL player Brenden Morrow crushed his drive on the first hole Saturday at the Coeur d’Alene Resort. As the ball rolled to a stop playing partner Mark Rypien cracked, “I don’t take vacations that far.”

Ex-Spokane Chief and NHL standout Ray Whitney birdied No. 17. Hockey legend Wayne Gretzky nearly did the same after a nice chip but his 6-foot putt slid by the right edge.

Fred McGriff celebrated with raised arms when he knocked it close from a green-side bunker. His golf swing isn’t as smooth as his baseball swing that led to nearly two decades in the big leagues, but numbers on a scorecard weren’t as important as The Showcase’s purpose.

“Cancer affects everybody,” McGriff said. “My father had pancreatic cancer. It’s a great cause (to raise money for Community Cancer Fund), so it’s great to be here.”

The 9-hole celebrity exhibition was one of several events in the third annual Showcase, which included a celebrity-amateur golf outing Friday and a concert featuring Sheryl Crow and John Fogerty later Saturday. The Showcase raised well over $1 million to fight cancer in the Inland Northwest.

“Like Ryan (Gee, co-founder of the CCF) said, why not us?’ ” said Rypien, the former Washington State Cougar and Super Bowl MVP. “We have maybe the greatest 3-on-3 basketball tournament in the world. We have Don Kardong and what he’s done with Bloomsday. We have the Ironman.

“And we have a lake here to showcase all this. The Showcase is not only golf but to showcase our area in the northwest. It’s making a huge difference in the lives of people that are going through cancer.”

A sizable portion of The Showcase dollars go to an endowment for Camp Goodtimes, a week-long camp for youngsters battling cancer.

“To me, children’s charities are the most important,” said former NHL star Brett Hull, a two-time Stanley Cup champion who lives at nearby Gozzer Ranch. “They’re our future.”

Morrow shot 3-under par, the day’s lowest score. He had a two-putt birdie on the par-5 first hole. His drive was just short of the green on his eighth hole, the par-4 13th. He drained the 40-footer for eagle after his caddy talked him into putting instead of chipping.

“I’m a scratch-ish player,” said Morrow, who spends summer months at Gozzer Ranch. “I’ve done this before for nine holes, but if we played another nine I’d probably give them all back.”
Hull shot 2-under to finish in second place. He birdied No. 8 from 8 feet and added another birdie on the par-5 11th. His birdie putt on his second hole circled the cup and somehow refused to fall, prompting him to wonder out loud if his ball “was afraid of the dark.”